Love is a beautiful thing that comes in many different ways, from self-love to friendship, to romance, and everything in between.

Another weekend is here and you should be able to enjoy the finest Nollywood movies no matter what your relationship status is.

For this weekend’s TFC Lists, here are five amazing Nollywood romance dramas that you must watch as a film lover irrespective of your relationship status.

A professional escort falls in love with his client, a lonely businesswoman who is still entangled with her cheating ex-husband.

The Escort is currently streaming on Prime Video.

Still Falling is a 2021 Nigerian romantic drama film co-directed by Karachi Atiya and Dimbo Atiya. The film stars Daniel Etim Effiong, Sharon Ooja, and Kunle Remi in the lead roles. The film had its theatrical release on 12 February 2021 on the eve of Valentine’s weekend.

The movie tells the story of love and forgiveness. This story of opposites of feelings – love and hate, faith and doubt, grace and guts, triumphs and regrets. The movie is 131 minutes long and is streaming on Prime Video.

After falling for a woman much younger than him, a wealthy, lonely man must confront the social stigma around age gap romances. Fine wine can be streamed on Netflix.

4. Lara and the Beat

When their glamorous, fast-paced lifestyle comes to a screeching halt, the two sisters try to rebuild their fortunes through music and enterprise. Lara and the beat are showing on Netflix.

Isoken is a 2017 romantic comedy film written and directed by Jadesola Osiberu (in her directorial debut). The film stars Dakore Akande, Joseph Benjamin, and Marc Rhys.

A woman’s family worries about her because even though she appears to have a perfect life, she remains unmarried. Isoken is currently showing on Netflix. 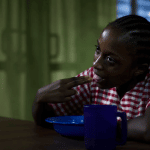 TFC Chat: Wasn’t Speaking to Anyone While Shooting at the Rehab – Genoveva Umeh
Next Article