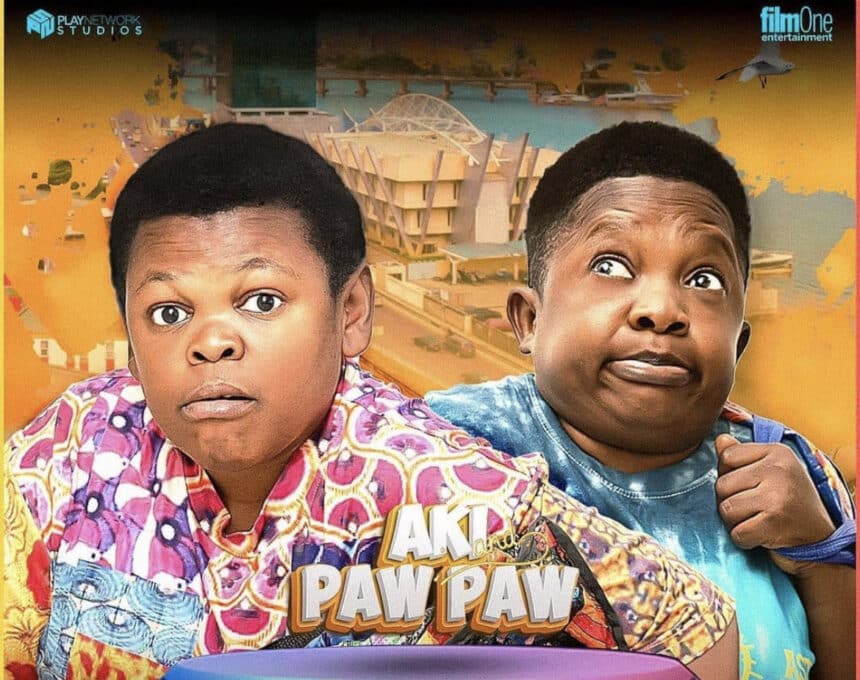 How stellar is Aki and Pawpaw?
2

The human mind is prone to amnesia. Names and memories, without paying attention to our subtle plea, subside. They wear off in bits and gradual unobserved time. Until the database fails to produce details on request, we are unaware that they are slouching off. The human mind isn’t a trusted memory device. Understanding the frailty of the human mind, Charles Okpaleke’s Play Network Studio began its trademark studio of making sequels and remakes.

The studio’s existence had earned its identity; the makers of remakes. In its homage-paying bid to history, the studio acquires intellectual rights to remake Nollywood classics. Living in Bondage: Breaking Free, Rattlesnake: The Ahanna Story and Nneka: The Pretty Serpent are feature films in its nostalgic oeuvre.

With dubbed glamour, improved camera shots, and tad-bit revamped storylines; these acquired films are made anew for audiences. Casting known faces and using similar titles, these cloned films propel audiences to relive their childhood. For the set of this audience who are far not privileged to enjoy the classics, their parent’s word-of-mouth account is enough to act, as the propeller. What their birth date had eluded them from seeing in the classics, now Play Network is giving them an exclusive view of another form.  And here comes another one, Aki and Pawpaw.

The archetypal Nollywood clown, Sam Loco Efe, Bishop Imeh Umoh (Okon), John Ikechukwu Okafor (Mr. Ibu), and Afeez Oyetoro, despite their obvious ad lib performance, held a spotlighted position in Nollywood. Fragments of their body, facial expressions, and names are a repository of laughter. Once the camera doodles to their scene, heart-wrenching laughter escapes cue in. The laughter isn’t compelled. Enjoying this coveted position are Instagram comedians whose obsessive casting seems hinged on their media followers. While their patriarchs’ stance brims with creativity, the protégés’ act reeks of cliché and often refurbished jokes.

Amayo Uzo Philips’ 2003 directorial, Baby Police, foreshadowed Aki and PawPaw’s act. Despite knowledge of their maturity, to Nigerians, Chinedu and Osita are still babies. Mazi Uche (Charles Inojie) also agreed. To him, Aki and PawPaw are children. Their acts in the film might give credence to Mazi Uche’s statement but their saggy breast and pot-bellied stomach is enough proof of this misnomer. These babies had left infancy for adulthood. And with that is the element of sparkle that once endeared them to many cinephiles.

When you x-ray the film in the light of its ilk, Nneka, the Pretty Serpent, which released before Aki and Pawpaw, as well as Glamour Girls, which released after, you might release that Play Network Studio is on to something else here. Yes, the purveyor of nostalgic collections. But the laissez faire handling of these materials, which reflects in the seeming lack of plot in these remakes is becoming Play’s identity. Why remake if there’s no fresher story, fresher perspective meshed with nostalgia to wow the audience.

In the film, the titular characters, Aki and PawPaw are bent on changing the direction of their lives. In an attempt to break from the shackles of poverty, the two brothers, are in Lagos — the capital hotspot for wealth, to make money.  Samantha (Chioma Okafor) suffers excessive exploitation from Panshak (Uti Nwachukwu). Panshak is the typical boss whose head endures no hardship but enjoys the profits of his creative employee — Samantha’s, hard work. Fortunately, the film identified two unparalleled plots.

Quite depressing, the confidence that this movie won’t fall into the same trope as others in Play’s database was checked. It was fumbled! The potential of being a social commentary on toxic bosses dwindled gradually as Samantha exited Panshak’s company. Becoming a shak herself, the anxious-for-wealth brothers became her prey.

Towards the film’s climax, the two brothers’ fame having reached its peak, their bond began to decline. In an intimate scene remarkable for its close-up shot, the two brothers reiterated their journey and their personal weaknesses. It’s a casual attempt to track their trajectory and the bond that held them together.

Aki and PawPaw could qualify as the quintessential film where product placement was excessively done. Play Network wasn’t pretentious in its film having no visible pathway. In any case, what the script written by Ozioma Ogbaji and Stephen Olubojo portend to do, it did: It perfectly advertised brands. Now, this is another miss from Play Network Studios for what I intend to see is a film not series of advertorials sprinkled with some elements of a feature film. Aki and Pawpaw is streaming now on Netflix.

How stellar is Aki and Pawpaw?
2
Critic's Rating 2 out of 5