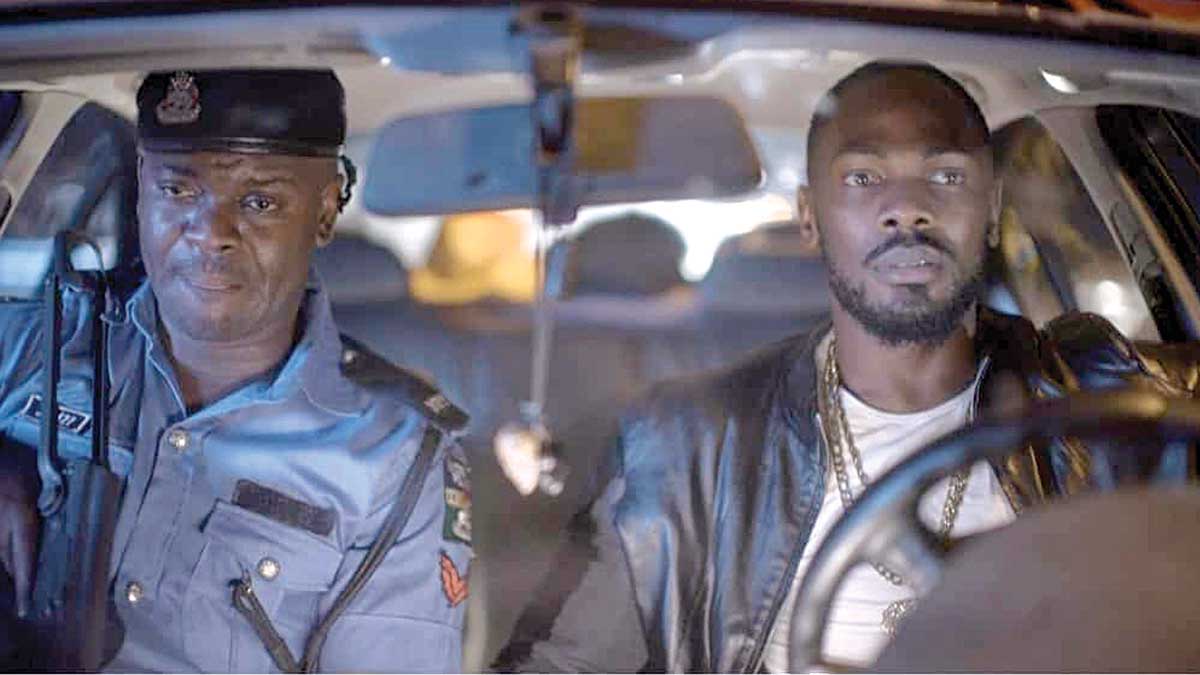 The establishing shot of Collision Course is a synopsis of the infamy that led to the EndSARS protest. Layers of events led to the now infamous protest; extortion, the disappearance of brothers and sisters, and homicide against Nigerian youth.

Details of the ongoing protest filter around in videos, through WhatsApp status, and eyewitness accounts; the frenzy shooting, of 20th October 2020. Those relevant dreams, aspirations, and lives of patriotic youth still rage on – Nigerians are still dying. Within splitting screen time, the first scene unearthed the trauma of the EndSARS protest.

Is Collision Course an imaginary biopic of the victims of police brutality? Perhaps, it’s Bolanle Austen-Peter’s documentary of the EndSARS movement; albeit a dithering and undecided one.

Documentation of history with films is important. ‘Silverton Siege’, ‘Jewel and Kalushi: The Story of Solomon Mahlangu’ are recent delightful examples of films produced in South Africa that charts the country’s historical events and people. With the ostracizing of history in secondary school syllabi, the need to recollect defining events in Nigeria was discouraged. There comes Bolanle Austen- Peter’s Collision Course.

It’s poised as a film that milks a national scar. Mide Johnson (Daniel Etim Effiong), the spotlighted victim of police brutality, was taken to ‘the abattoir’ by members of TARZ where ‘conscience is for sale’. Either as prologue or epilogue, films with historical content have a disclaimer. ‘It’s coincidental’, the signature words of the disclaimer help draw the line between fiction and non-fiction. However, in this film, TARZ has an apparent intonation of SARS. The signature question, ‘are you a Yahoo Boy?’, the carefree killing of youths makes the film dovetails between fiction and non-fiction, undecidedly.

Aside from ogling Mide either by cheering him on or shouting in a voice an octave higher ‘I love this man’, Hannah’s (Oluwabamike Olawunmi-Adenibuyan) longest strings of words which double as the film’s important scene was the car scene. Hannah’s words established her as a subtle Marxist. The third mainland bridge aside from being the longest in Africa until 1996 reflects the ‘social stratification’ of Lagosians. A part belongs to the exclusive haven of the rich. The other part is the Lagos of submerged dreams. Magnus, a police officer, and Mide, a musician, both belong to the ‘submerged dream’ territory.

Magnus’s (Kelechi Udegbe) frustration was fuelled by strings of events. The uproar of Ekaette (Chioma Akpotha), self-doubt caused by incessant loyalty to the country without a reward and murmur of unpaid or underpaid salary moulds a monster in this man. It’s an endless directory of crises. Reducing the burden, Magnus made a roadblock, and  ‘anything for the boys’ follows.

Mide hides details of the TARZ extortion. Hannah, his girlfriend, and his father (Bimbo Manuel) did not know of it. Far from becoming a news item, he listened to news reports of police brutality. The news report and sight of the police checkpoint unearthed his traumatic experience. Fela called it ‘suffering and smiling’. In today’s lingua it’s the ‘we-move’ culture.

Mide, still keeping in check his trauma, met Magnus at the checkpoint. The series of event to follow made the car scene from ‘Two Distant Strangers’, ‘The Travon Free’ and Martin Desmond Roe’s directed Oscar award-winning short film, comes to mind.

The tension between Magnus and Mide dissolves into sympathy for each other’s pain. A beacon of understanding emanates from Mide’s words. “It’s the system that is the enemy; not me”. In the two films, a truce was declared. Carter’s words too were “…this system reward you guys with the best possible price, for the only thing you had nothing to do with, being white”. However, unlike Officer Mark, Magnus ‘accidentally’ shot Mide to death— truce is a facade.

It seems that juggling a quartet of responsibilities in the film, D.O.P, Producer, scriptwriter, and songwriter, made James Atunwa lose sight of the insight Mide spoke about – “the system is the enemy”. While that declaration could have moved to a logical destination, it detours into a liberal conclusion. “The individual is at fault, not the system” — Magnus’s eventual arrest reduced the potency of Mide’s insight. So, which system is at fault? It’s the capitalist system.